Close ups of deep french kissing begin as Randy Moore takes off Ariella Ferrera’s bottoms and rubs her already moist pussy while Ariella squeezes Randy’s pert nipples. More deep kissing ensues, then back and forth this match goes from sex to wrestling, wrestling to sex, until each girl is nude as Ariella starts to dive down deep into Randy’s pussy with her tongue! This extra length video is an XtremeFemaleFighting Classic!

We’re pleased to present this classic sex-wrestling match from XtremeFemaleFighting – remastered in full HD for the first time! XFF got sexual dynamos Randy Moore and Ariel Ferrera together twice, and in this second match the sparks really flew! Recalling their last match, Randy brags how she made Ariella cum and scream over and over. “That was then,” counters Ariella as the two move closer to one another. Close ups of deep french kissing begins as Randy takes off Ariella’s bottoms and rubs her already moist pussy and Ariella squeezes Randy’s pert nipples. More deep kissing continues but then Randy decides its time to teach this girl a wrestling lesson. Throwing her on the couch Randy continues to rub Ariella’s pussy as Ariella grinds and stretches Randy’s nipples. Now the fighting begins…Randy uses body scissors to trap her foe as Ariella tries to escape by pinching Randy’s now sore nipples. Back and forth this match goes from sex to wrestling, then wrestling to sex, each one is nude by this point as Ariella starts to dive down deep into Randy’s pussy with her tongue. You’re treated to Xtreme close ups of tongues and fingers exploring sensitive regions as both girls become Incredibly turned on. Then….the vibrator toy comes out!! From there it’s orgasm after orgasm as both girls take turns pleasing the other. Their first match was hot, and this one does NOT disappoint, the sex moves past the last and the fighting is more intense. Randy Moore and Ariella Ferrera in a sexual battle!! Back by popular demand – two amazing girls in an equally amazing sex match !!! 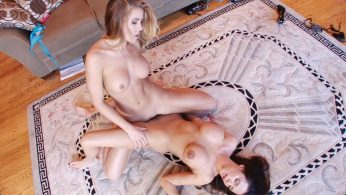