Welcome to the amazing world of FemFightersXcess.com! 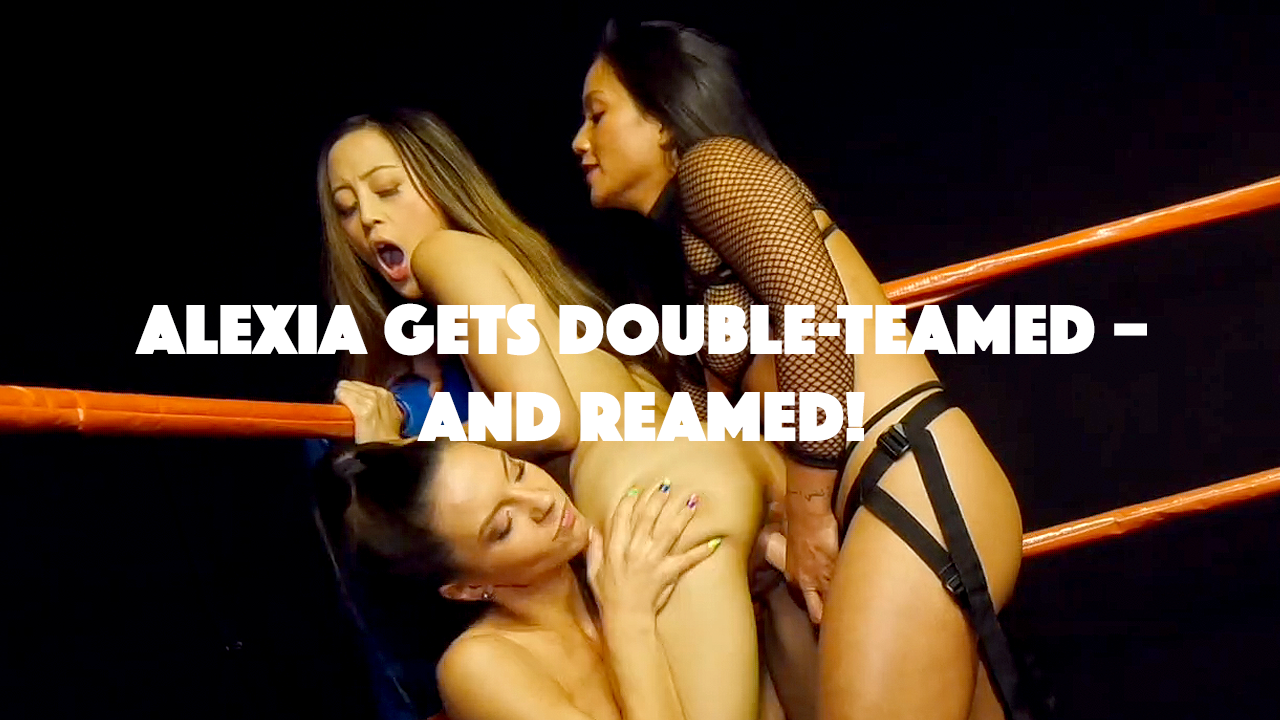 Poor Alexia Anders! The slender, sizzling asian cutie had just gotten the best of equally hot Milana Ricci when in came a little rough justice in the form of the (watch closely now) just as smokin’ Lana Violet! How rough? Well, sit down and get comfortable, because this bit of payback is going to be two bitches! Milana and Lana already have their nimble fingers in Alexia’s pie when we begin, and they quickly fling her onto the ropes where Lana holds Alexia fast, pinching and pulling her succulent natural breasts while Milana opens those silken thighs, whips out a vibrator, and gives Alexia’s quivering pussy some of what Alexia gave her last time! They follow up by dragging our heroine to the canvas, where Milana spreads that delicate orchid and greedily stuffs two fingers in deep as Lana continues to maul Alexia’s pert boobs! Now on all fours, Alexia can do little but whimper as Lana goes for some satisfaction of her own, donning a large strap-on and mounting her from behind while Milana holds her captive! Oh, yeah, this one’s not for the faint of heart! Just when you’d think pretty Alexia has taken all she can stand, our evil duo finds a way to further humiliate her: they bind and suspend her from above, and proceed with her comeuppance unhindered! Little Alexia’s sexual domination is almost too much to bear, yet you can’t take your eyes away, in ALEXIA, PLAY THE ONE WHERE MILANA GETS POKED WITH A GIANT DILDO – PART 2!

We’ve reached back into our library of classic matches from XtremeFemaleFighting for this one, and you’d better buckle up because you’re in for a thrill-ride! Actually, it’s Sadie Holmes who’s going to get a ride in this one, while Akira Lane will be in the driver’s seat and in case you’re wondering, Akira knows how to drive a stick! The ladies come in nude, and as Akira tosses Sadie onto the bed it’s clear that everything’s up for grabs from the word “go,” from Akira’s tight curves to Sadie’s well-appointed tits. Akira always looks good to us, but here she’s especially delicious as she climaxes while straddling Sadie’s crotch. Sadie’s nipples are perpetually erect anyway, but they practically pop out of the screen as Akira gives her boobs a thorough detailing with lips and tongue. Then, things get magical. Akira pulls out a huge vibrator, spreads Sadie’s legs wide, sits on her chest, plants that massive tool onto Sadie’s trembling, wet twat, and holds on for dear life. For six minutes you’ll want to watch over and over again, Sadie can do little else but come (over and over again), with the business end of the vibrator tight against her pussy and Akira refusing to budge! By the time Akira relents, Sadie’s thighs are quivering uncontrollably as she lies in an ecstasy-induced stupor! It’s an amazing feat of endurance made only more incredible as Akira accepts some reciprocation, but can barely last half as long before begging off. As the ladies slip into a gentle embrace, you’ll be the one basking in the afterglow, in ASIAN PERSUASION IN THE BEDROOM!

Looking for Xtreme Female Fighting matches?
Just enter XFF in our search bar above, or select XFF from the menu bar!

Check us out every week for more of the best wrestling and the hottest sex you’ll ever see!

Got a sexy girl fight fantasy? Don’t keep it to yourself– order a custom match today!