Helena Locke is the White Shadow, a super hero with powers that no mere mortal can compete with – so when Aaliyah Love enters the ring as the dominatrix sent to do battle with her, well, let’s just say Helena assumes it’s some kind of joke. But White Shadow enjoys a good joke especially when it enables her to throw some puny blonde around, and that’s exactly what she does, poor Aaliyah gets a good beat down – what was she thinking she… wait one minute, what’s this, a secret weapon with Kryptonite! Oh no, White Shadow is weak and helpless, now we see the dominatrix in action as she takes her turn to beat hell out of this super hero. She doesn’t just beat down her super foe she users her Kryptonite rod on Super’s super pussy in every way possible. Those pussy lips are stretched in every way possible and from so many contorted positions, the evil dom so loves using her Krypto rod on this super pussy, and of course she uses it on her breasts too. Never have we seen a pussy so distorted, bent, elongated, stretched and strained, never has a super been so abused, from severe match books to stretched across the ropes and always back to that tender middle. If all of this wasn’t enough she gets out the contraptions, now what the hell is she going to do with those, no she wouldn’t — yes she would !!!!! 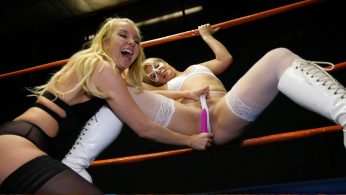 You're viewing: AALIYAH PLAYS A LITTLE ROUGH WITH HELENA’S KITTY $25.00
Add to cart