CASSIE GOES STOMPIN’ AT THE SAVOY

Christina Savoy is a tall blonde with one hell of a body and full of tats, and of course we all know how luscious Cassie Del Isla– she has quickly become our most popular girl! Busty blonde Christina taunts Cassie but Cassie soon has her foe in the corner, and she works over those large breasts, especially going after her huge erect nipples, then to her pussy!!

She made a real hit at DT and Cassie Del Isla wanted another shot at Christina Savoy because she had her thong taken and she is looking for revenge. A new Christina, of course it would be very hard for her to ever compete with the famed Christina Carter but this new one is great in her way – she is a tall blonde with one hell of a body and full of tats, and of course we all know how luscious Cassie is, so much so she has quickly become our most popular girl. This busty blonde taunts Cassie as she twirls the bikini she took from her last time, revenge is coming as soon Cassie has her foe in the corner working over those large breasts, especially going after her huge erect nipples, then to her pussy — yes this is a pussy domination match and each lady is determined to dominate her foe’s tender center. Of course this domination is comprised of lots of wedgies, first they are wearing them and get the bikinis pulled deep between their lips and later when they strip them off they use them to wedge up their centers. Also to gain control they have lots of pussy pinching as between their fingers they pinch and pull the feminine lips and lastly their fingers dive deep into the juicy centers. But it’s watching these two amazing bodies roll around on each other that is the real treat and when these incredible figures collide for some tribbing it’s delicious – then of course there’s the fucking because the loser always gets it in the end and I do mean the end because Cassie is more than delighted to break in this new ass and what an incredible ass it is. Multiple positions send that dildo deep, the new girl is officially broken in. Two incredible bodies makes for one incredible match !!!!!! 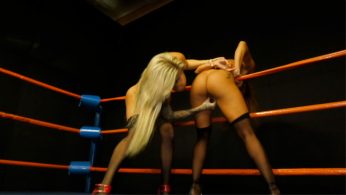 You're viewing: CASSIE GOES STOMPIN’ AT THE SAVOY $25.00
Add to cart